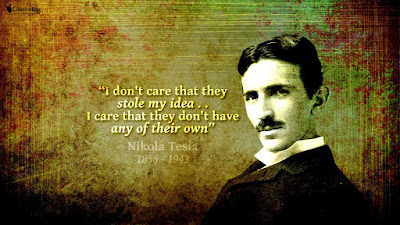 
[...]A biographical article about Nikola Tesla appeared in the Tesla Tech, Inc. magazine, “Extraordinary Technology,” Volume 4, Number 3, Aug., Sept., Oct., 2006. [15] The article, written by Dustin Wallace, spoke of Tesla’s childhood, some of his inventions, and his last days.
Wallace wrote (pp. 21-22),
“The Yugoslav Monarchy in Exile was summoned to visit Tesla in the fall of 1942. However, Charlotte Muzar, a secretary, paid Tesla the visit. From his condition upon her arrival she felt as though he may not live through the night. Another friend of Tesla’s, Kenneth Swezey visited him during the time and noted that he was existing on warm milk and Nabisco crackers alone. It was apparent that Tesla was nearing the end of his time.
By late December of 1942, Tesla began meeting with two U.S. government agents in order to share some of his most sensitive discoveries. These men carried away many of his documents for microfilming.”

“On January 4, 1943, Tesla’s faithful assistant, George Scherff, visited Tesla for the last time, Tesla was found deceased in his hotel room on the morning of January 8. 1943.
He had passed away between those four days since Scherff’s visit.”

The article continued,
“Following Tesla’s death the United States Office of Alien Property, under the instructions of the Federal Bureau of Investigation, confiscated all of Tesla’s papers and property. This was an interesting maneuver considering that Tesla was a United States citizen.”

The significance of this benign description of Tesla’s inventions and his last days has a direct relationship to the previously unknown claims of Otto Skorzeny*. As Skorzeny described (to Berman) in detail his involvement with George H. W. Bush (George H. Scherff, Jr.) in organizing the CIA by absorbing Nazi S.S. agents,” he intimated that it was Reinhard Gehlen and himself who murdered Nikola Tesla on January 6, 1943 by strangulation/suffocation.

Prior to the murder, Skorzeny and Gehlen “spoke in great detail to Tesla about his most-advanced technologies and then stole the blueprints of his best, most-secret inventions.”

Were these the “two U.S. government agents” about whom Dustin Wallace wrote?
The timing of George Scherff’s last visit to Nikola Tesla was suspicious, as well[...]